While Ecuador might be a small country, it definitely packs a punch when it comes to a variety of places to see and things to do.

With a rich local and colonial history, breathtaking landscapes, and friendly people, Ecuador is certainly one of the best countries to visit in South America. From the incredible Andes Mountains, Galapagos Islands, and a wealth of vibrant cities and towns, Ecuador has something for everyone.

This all sounds exciting, but how do you decided where to go in Ecuador with so many options? Let’s take a look at some of the best places to see in Ecuador.

Best Places in Ecuador Worth Visiting

Here’s a list of the top cities, towns, and other places worth visiting 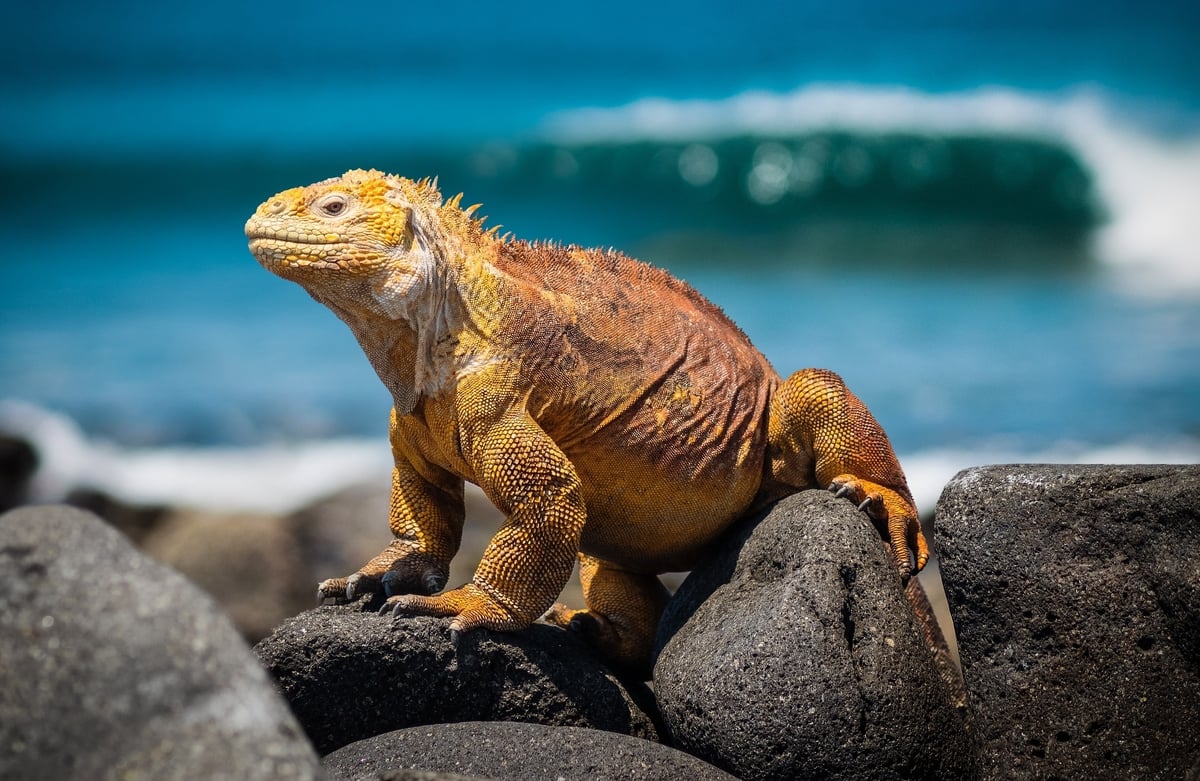 Sitting about 1,000 kilometres east of the mainland, the Galapagos Islands are one of the best tourist attractions in Ecuador. Since their discovery in the 16th-century, they have blown away countless explorers and visitors from around the world.

This UNESCO World Heritage Site is made up of 13 large islands, 42 islets, and six smaller islands. It has one of the most unique ecosystems in the world, and—unsurprisingly—it is filled with a wide variety of wildlife. This includes its famous giant tortoises.

The Galapagos Islands are one of those untouched places in the world. So, if you are lucky enough to visit them, you’re guaranteed some of the most inspiring and unspoiled views in South America At 2,850m elevation in the stunning Andes Mountains sits Quito, Ecuador’s capital city. It’s also the highest capital city in the world. The city was founded in 1534, and its centre is one of the most well-preserved historic districts in South America.

Quito is a vibrant city, blending a unique mix of Spanish colonial architecture with touches of local culture. Its vibrancy is seen in a large number of churches, museums, and plazas. Here you can expect to see the city brimming with artisans.

One place that you should explore in Quito is the Plaza Grande. It’s a beautiful square that’s filled with tons of great restaurants, galleries, and cafés. It’s also near many of the city’s most important attractions, including the Presidential Palace.

The city is also known for its stunning churches and has around 20 of them. They are all fine works of art and combine colonial-era architecture with a dash of indigenous character. One of the most noteworthy churches worth visiting is La Compania de Jesus. It was built in the early 17th-century and holds UNESCO status. Named “The Pearl of the Pacific”, Guayaquil is a stunning city located on the banks of the Guayas River. It’s the largest city in Ecuador with about 2.7 million people and serves as the city’s commercial hub.

It’s also the gateway to the Galapagos Islands, and so most cruises depart from here. In terms of things to do in Ecuador, Guayaquil is packed with tons of exciting activities and sites.

The city is a good mix between old and new. You’ll find interesting hotspots such as picturesque plazas and squares, along with breathtaking modern attractions. These include the Guayaquil Metropolitan Cathedral and the Museo Antropológico y de Arte Contemporaneo.

This is one of the most incredible places to visit in Ecuador. It dives into the country’s history, art, and culture through a variety of intriguing displays.

One place that should definitely not be missed while you’re in Guayaquil is the Malecon 2000. It’s a stunning 2.5-kilometre promenade adjacent to the river. It’s lined with museums, bars, restaurants, and gardens, so a stroll along it is the perfect way to end the day. Officially known as Santa Ana de Los Cuatro Ríos Cuenca, Cuenca is a picturesque city situated in Southern Ecuador. It sits at 2,596 metres high in the Andes Mountains beside the Matadero River.

It’s one of the oldest cities in South America and was built in 1557. Its city centre was also designated as a World Heritage Site in 1999.

There are a ton of things to look forward to in Cuenca, as it is a city rich in cultural and architectural heritage. Some of the city’s highlights include the Old Cathedral of Cuenca, which was built in 1567.

Then there’s the New Cathedral of Cuenca built in the 1960s, which is very hard to miss because of its colourful blue-domed roof. Other highlights include the historic city centre, where you’ll find the Plaza San Blas Square and the Plaza San Francisco. Here you’ll find many merchants selling textiles and other artisanal items.

Cuenca is a great place just to wander around. There are a plethora of cobblestone streets with quaint balconied houses, and tonnes of colonial buildings – perfect for some photographs to remember your trip.

You can learn more about the local people who dominated this area centuries before the Spanish arrived. Venture off to the Canar plantation, which houses the largest Incan ruins in Ecuador. If you’re someone who enjoys being outdoors, then Baños is the perfect place for you. It’s a small town located in central Ecuador at the edge of the Amazon basin. It’s often referred to as the “Gateway to the Amazon ” and is nestled between dense jungle foliage.

It’s also near the very active Tungurahua Volcano. This isn’t the town’s main attraction, though. Its main attractions are actually the hot springs which are heated by the volcano, as well as the countless spectacular waterfalls in the area.

Baños is one of the most beautiful places in Ecuador because of its stunning natural surroundings and the views that come with it. Some activities to look forward to in the area include hiking, jungle tours, mountain biking, and white river rafting. Located in north-central Ecuador, Otavalo is a picturesque city that is very colourful and exciting. It is mainly known for its weekly market which is believed to have been in existence long before the Spanish arrived.

It’s one of the largest markets in South America and was founded by the indigenous Otavalo people. Here you can find all sorts of interesting handicrafts. These include rugs, sweaters, bags, leather goods, and jewellery – all made by the Otavalo people.

You can also find local food items and spices. A visit to the Otavalo Market is quite an experience and one that shouldn’t be missed if you get the opportunity. If you enjoy hiking or trekking, then you might enjoy the Quilotoa loop. It’s an exhilarating four-day hike that takes you through some of the most remote Andean villages in Ecuador. With that being said, it’s also one of the most scenic trails, which eventually leads to the Quilotoa Volcano.

The volcano is located in the Illinizas Ecological Reserve, near the edge of the Andes Mountains. The Quilotoa Volcano is most famous for its crater lake filled with the most beautiful turquoise water. From the crater, you can enjoy some of the most admirable panoramic views. Located just 50 kilometres away from Quito lies one of Ecuador’s most well-known attractions, the Cotopaxi National Park. This national park may be close to the capital, but it has a rather remote feel about it, making it perfect for a day trip outside the city.

One of the highlights here includes the Avenues of Volcanoes, a chain of volcanoes that run down the Andes. These include the massive Cotopaxi Volcano and the smaller Ruminawi and Sincholagua volcanoes.

Ecuador’s Pacific Coast stretches all the way from its border with Colombia down to Peru. It’s one of the most scenic coastlines in South America, and yet is overlooked by many travellers.

It provides a refreshing change from the tall mountains and volcanic peaks, and has some of the most incredible golden sandy beaches and resorts. It’s the perfect place to visit for a wonderful summer vacation.

Some beaches worth visiting are the Salinas, Bahia, and Montanita beach. It would almost be criminal to visit Ecuador and not go and see the awe-inspiring Amazon Rainforest. Ecuador might only be home to about 2% of the rainforest’s total area, but it still spans across four of the country’s major regions.

The Amazon has one of the most diverse ecosystems in the world. It is home to over 1,000 species of amphibians, birds, reptiles, mallas, armadillos, and monkeys. You’ll even find rare creatures like jaguars in its depths. And of course there’s the incredible Amazon River with its own unique creatures.

You can enjoy various jungle excursions and enjoy activities like canoeing, cruises, and river rafting. You might even spot some of the indigenous communities that live alongside the river, so exploring the Amazon Rainforest is totally worth it.

Final Thoughts on Where to Go in Ecuador

There you have it, a complete list of the best places to visit in Ecuador. No matter what kind of a traveller you are, there’s a destination for you to explore in Ecuador.

From the incredible cities of Quito and Cuenca in the Andes Mountains, down to the gorgeous Pacific Coast, there’s something for everyone. And who could forget about the incredible Amazon Rainforest?

Hopefully this post has helped you to fall in love with Ecuador.

Tip: Why not check out this travel guide on What to do in Cartagena, Colombia for more South American travel inspiration?

Budget Friendly Things to do in Dubai

Study Abroad Packing List | What to Bring for Studying Abroad

Places to Visit in Chicago for Free | Best Things to...